How to Re-Write Your Book in a Different POV and Save Yourself Weeks of Editing.

Ever wished you’d written your book in a different point of view (POV)?

You’ve written your book (or you’re part way through it) and you realize something’s not working. The characters are believable, the plot is great and your prose is tight. But you’re just not feeling it. Well, maybe the problem is the POV.

If you’re writing a sweeping saga in 1st person and keep running into roadblocks because everything has to go through your protagonist’s POV, then you may need a re-write. Or you’ve written your book in 3rd person but you’re story revolves around a few characters, with one voicey protagonist. 1st person would bring the reader into their world better, and a re-write is the only way you can fix it (or scrap the whole thing).

You could pay an editor thousands of quids to fix your mistake, or you could get smart.

First off, some might say you should know your point of view before you start writing a word. But if you’re a ‘pantser’ that’s not always possible. And even if you are a ‘planner’, you may still find something hasn’t worked.

Well, no. I’m here to tell you that there is a way to save yourself weeks of editing.

Last year I wrote an entire book in 3rd person. It’s called the Big We, (a semi-autobiographical, satirical, dark-comedy about a failed musician getting regular visits from the ghost of John Lennon). I originally wrote it in the 3rd person because I wanted to jump to the afterlife with Lennon. But I found a way to do that with memos that he sends to the other side. Anyway, once I got to know my (voicey) character, Andy Zigaloa, I knew then the book needed to be in the 1st person.

Long story short, I re-edited 90,000 words to 1st person. Um, hang on, nah. It still wasn’t working for me. Andy was a bit mental and talked about himself in the 2nd person. So I tested it and yep, not only did I re-edit a 90,000 word document once, but I did it twice. The finished draft of the Big We is now in the 2nd person.

I’m not crazy—it only took me about three days to do it. Less on the second time.  Get your thinking caps on, I’m going to take you back to school.

So the trick to this method is your search option in your word processor. I’m using WPS Office for this example. (It’s a free program that’s as good as Word—if you’re a struggling writer like me). There is a ‘replace’ or ‘find and replace’ function in most word processors. Find it. We will be switching between ‘replace all’ and ‘replace’ (once).

First off, this will cut out the donkey work, but you’ll have to take a day (or two) to read through your manuscript to make the final (replace once) changes. But much of the editing is automated this way.

I’ll assume most of you are going from 3rd to 1st or vice-versa. (This will still work for 2nd ) There will be parts in a 1st person where your protagonist is talking like a narrator using 3rd person ie: when you use he, his, she, her’s. Depending on the style and voice of your character this method may not be ideal. To avoid changing those parts, you will cut them from the entire manuscript and add a tag at the side of the document of what needs to be put back where, and save those parts in another document. (Bit of a slog.)

If you know your book you should be able to skip to those parts easily. If you’ve got a lot of talking about others you’ll have to go though it, removing what’s needed. It took me a few hours, but trust me, it’s worth it when you see your document magically transform like fairies came in the night and rewrote it for you.

Once you get into this it begins to make sense and takes shape very quickly.

First off, back up your document regularly (with v1.1, v1.2) so you can revert to an earlier point if you get lost.

I’m going to edit a piece from the Big We and show you exactly how I did it. I chose a longish piece (331 words, not edited) to show you how many changes you need to do and how it takes shape as you go along.

Andy is runnin’ down the corridor, sweatin’ buckets-loads and usin’ the sleeve of his coat to dry himself. The fact he is shirtless under his wide-open coat draws funny looks and gasps. And he thinks he’s sexy. If he was his old self he’d see he was in a hospital and sexy he is not. More like an escaping patient with severe mental disorders.

Andy sprints across the carpark towards a large green area. Legs buckle, hair blows lankily—greasy from thirty-six hours on a pillow. His laces are untied, trainers are loose and he trips. Straight back up though and lookin’ at the large red and black scrape-marks on his chest while runnin’ again, faster.

“The doctor said I should exercise,” he says breathlessly. A surge forwards, like a kid who’s realized he was allowed to push himself when his over-protective Mammy wasn’t around. His legs wobble, driving onwards, faster, weaker, his foot hard to the throttle and he stumbles again. Like a man learnin’ to walk on stilts, he keeps his balance and continues on for few feet, and then he’s down.

The blue sky holds his gaze, his stomach oscillates in a wave-like fashion with his chest as he gasps for breath. His body is autonomous, he’s not his usual self, and he looks down at the strange body below his chin. Tinglin’ starts in his legs, moves to his gut, churns, swells and fills his chest cavity. His hands tingle some more, his hearin’ dulls, his throat readies for what’s comin’, and a river of saliva pours into his mouth from nowhere. Andy rolls onto his side and the saliva dribbles out of his mouth. A violent punch in his gut by some unknown force sends a tidal wave through his body. Burnin’ in his chest is followed by a bitter-sweet taste in his mouth. Hot, lumpy liquid spews out of him at high velocity. The smell is putrid and he gags and vomits until he can’t breathe.

Right, let’s do this!

What we want to do here is re-write anything that makes it 3rd person POV, mainly pronouns and primary auxiliary verbs. So the first word we need to change here is ‘Andy’ and make that I. He’s becoming the narrator now.

First, your protagonist’s name, in this case, ‘Andy’, needs to become I. Highlight Andy and hit search. Type ‘I’ in the replace box and hit ‘replace all’. 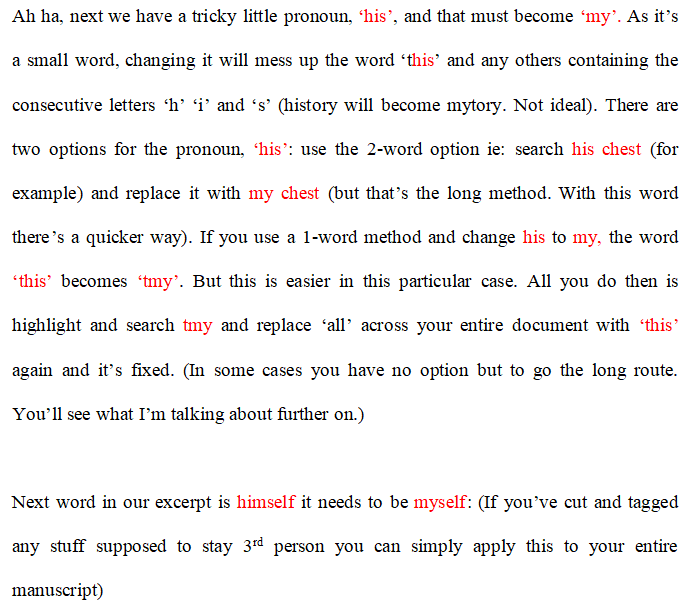 So this is what we have after the first few replace ‘all’ edits. We are going to go along now making changes to ‘all’ or ‘once’ in the document until the text starts to look right.

You have to change thinks to think (same goes for all these primary aux verbs), but you won’t want to change the singular version of the word ‘thinks’ across the entire document. So do the 2-word method here. 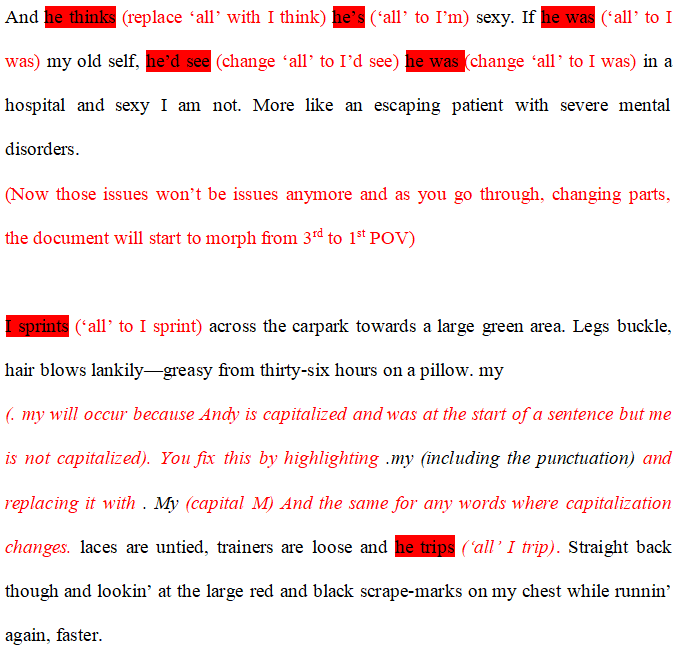 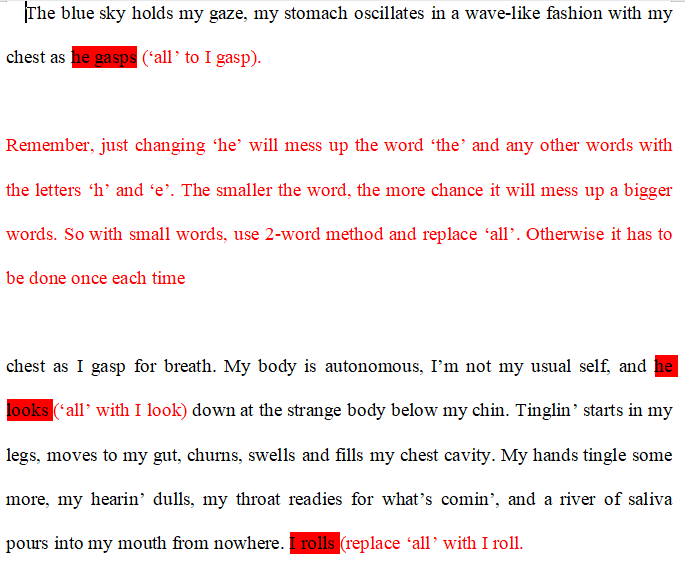 Let’s have a read of how it sounds now.

I’m runnin’ down the corridor, sweatin’ buckets-loads and usin’ the sleeve of my coat to dry myself. The fact I am shirtless under my wide-open coat draws funny looks and gasps. And I think I’m sexy. If I was my old self I’d see I was in a hospital and sexy I am not. More like an escaping patient with severe mental disorders.

I sprint across the carpark towards a large green area. Legs buckle, hair blows lankily, greasy from thirty-six hours on a pillow. My laces are untied, my trainers are loose and I trip. Straight back though and lookin’ at the large red and black scrape marks on my chest, while runnin’ again faster.

“The doctor said I should exercise,” I say breathlessly. A surge forwards, like a kid whose realized I (ah, missed one as he’s talking about himself in 3rd person) he was allowed to push himself when my (and again) his over-protective Mammy wasn’t around. My legs wobble, driving onwards, faster, weaker, my foot hard to the throttle, and I stumble again. Like a man learnin’ to walk on stilts, he keeps (On more. You will have to read through it for these pickups, but doing the ‘all’ option should clean them up further along) I keep my balance and continue on for few feet, and then I’m down.

The blue sky holds my gaze, my stomach oscillates in a wave-like fashion with my chest, as I gasp for breath. My body is autonomous, I’m not my usual self, and I look down at the strange body below my chin. I’m tinglin’, it starts in my legs, moves to my gut, churns, swells and fills my chest cavity. My hands tingle some more, my hearin’ dulls, my throat readies for what’s comin’ and a river of saliva pours into my mouth from nowhere. I roll onto my side, and the saliva dribbles out of my mouth. A violent punch in my gut—by some unknown force—sends a tidal wave through my body. Burnin’ in my chest is followed by a bitter-sweet taste in my mouth. Hot, lumpy liquid spews out of me at high velocity. The smell is putrid and I gag and vomit until I can’t breathe.

It takes shape as you go, and after a few chapters, you won’t have many changes to make. By the middle of your book, you should have most if not all words fixed, besides the ‘replace once’ changes.

You’ll have to go through the entire document (no way out of that, I’m afraid) and check it all looks good. But this method will save you weeks of editing!

Hope this helps. If it did, I invite you to sign up to my blog for more nifty articles on the writing process.

Darran Brennan grew up in Dublin, Ireland, where he still lives today. After living in London, Bahrain and Thailand, he studied music at Ballyfermot College, Dublin. For many years produced electronic dance music as Demon Groove before he turned his hand to writing. His debut novel, Treoir, is about the superstition surrounding an African boy with albinism who joins a remote island community off the west of Ireland. You could describe the book as little like Sally Rooney’s taut dialogue dropped into Joseph Conrad’s Heart of Darkness.

Read an Excerpt from Treoir here

More info can be found at www.darranbrennan.com