To the point of self-annihilation, I have become obsessed with writing stories. Paradoxically, I’ve never been happier. I’ve been writing for over a decade and novels (relentlessly) for seven years—in search of an authentic, unpretentious, concise and clever story/voice.

I’m from Dublin, Ireland and began writing seriously in 2015 after I spent six months cycling through Europe and living on a Thai island. I used that life-affirming experience to shape the narrative and character arcs of my latest book A Heart Not Belonging (about self-love, learning to be free and brave and following your wildest dreams). Since 2015 I have written 11 complete manuscripts and hundreds of short stories. I self-published my debut novel TREOIR: CURSE ON THE ISLAND in 2021.

I grew up in Dublin, Ireland, where I still live today. After living in London, Bahrain, and Thailand, and studying music at Ballyfermot College, I produced electronic dance music for several years under the name Demon Groove. My music has been played in clubs all over the world.

In September 2011, I signed my first EP to Frederik Olufsen’s (of the Bang and Olufsen family) label, Royal Fetish Recordings. Between 2011 and 2014, I released eleven EDM songs through indie labels—including Tasty Records and Adapted Records. When the EDM scene lost its way and the music devolved into fan-service for teenage boys playing video games, I went travelling for 6 months. During this time I wrote several stories and the beginnings of a book which is now a novel called ‘The Truthers’.

2015, during a summer biking from Dublin to Milan and living on the Thai island of Koh Chang, I wrote a blog that I turned into a travel memoire called in Fields of Nettles). While on Koh Chang, I began writing a story about a band travelling on a small aircraft that crashes and the fallout after the singer dies. I had no idea how to structure sentences properly, I vegeuly understood what an independent clause was, and my spelling was horrendous—I still struggle with whether it’s an ‘e’ or an ‘a’. However, I am becoming a bit of a grammar-Nazi and a logophile. During my three months on the island, I began scribbling a first draft of The Truthers (called then, The Governor’s Daughter). It’s the story of an Irishman returning to America to help his son prove himself to a group of militant patriots who have found the runaway daughter of a corrupt governor. 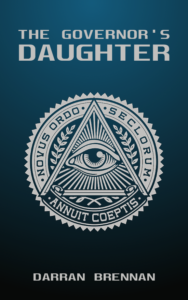 When I returned to Dublin at the start of 2016, I began editing The Governor’s Daughter. This is when my obsession with the craft of writing grew. I taught myself the intimacies of voice and what it means to be a proper writer; by reading and experimenting with style, voice and POV—you might be able to see that in my early short-stories.

An 80,000-word edited draft of The Governor’s Daughter was finally put aside early 2017, and I wrote two 60,000-word manuscripts—which served as lessons in structuring a book. I did the same thing in 2018, finishing two 80,000-word manuscripts: The True King of Ireland (about a dolphin that helps a politician win an election) and Pieces of a Man (about a divorcee writing a book on a plane and falling in love with an air-stewardess). As decent as they were, I felt I hadn’t nailed it yet. Sensing the real books were to come, I shelved both. (I may return to them at a later date).

In 2019, after working without much enthusiasm at a job that I had lost my passion for, I was fired by an ego-maniac of an employer and fell into a depression. This turned out to be serendipitous. From the ashes of despair, a novel came: Treoir. Around that time, I was having lucid dreams. I’m not usually one of those people who tries to interpret dreams, but this one in particular resonated with me. I was on an island helping kids escape from crazed people. it was simple but visceral and stayed with me all that day. I decided to write it down. That dream became the island setting for Treoir (Irish for Guardian), and the children became the subjects of the novel: Jonah, a genius with albinism, and the protagonist’s precarious niece, Quinn. I wrote the first draft of Treoir in about 6 weeks between May-June 2019 and, after several rewrites and months of intensive editing, I published it October 9th, 2020.

While editing Treoir, I began writing ‘Judging Us’ (called then Death of Venice). I wanted to explore having the antagonist as the narrator and further the theme I began with Treoir: how ‘need’ and ‘human nature’ conspire sometimes to turn good people bad. In Judging Us, a stressed-out barrister finds his once perfect marriage turning abusive and falls for a beautiful and intoxicating  sex worker, ignoring the fact he’s about to become a judge. I didn’t want to write a legal thriller per se (I’m not a lawyer) but I did want to write about the corruption of a character who wears a cape… and a wig—given how small Ireland is, I’m curious if a barrister or judge would dare create such a corrupt view of the Irish legal profession as I have. 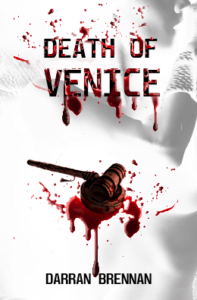 I got lost in the stories; writing for 10 hours per day wasn’t anything unusual. Between 2019-2020 I wrote several manuscripts (each one over the course of 2 months). One being How to Mend a Broken Heart, a streetwise Dublin barber tries to escape his miserable past by helping a young hood put his life back together after his father kills himself. Another is Hometides, a semi-autobiographical, satirical, dark-comedy based around a failed musician facing reality again and trying to figure himself out and what it is to love. I also started My Sister, The Quiet Girl, about Irish twins born months apart who get themselves mixed up in political activism that leads to a twisted, Hitchcockian plot involving fake identities and manipulating people into murdering for them (It’s Now Called ‘Die For Us’).  I also wrote half-a-book called The Bad Book, about two bored high fliers who make a bet and play with a loner’s life, inviting him into their celebrity world, trying to win the bet to see if he can be corrupted, and if so, how far he can be pushed: murder being the ultimate, prize scooping act. 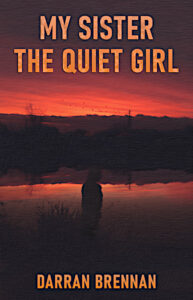 While writing/editing those books I was taking days and weekends to edit Treoir. I decided I wasn’t comfortable with seeking an agent and publisher as I didn’t fully understand the industry. Having what I believed a great story in Treoir, I decided to try self-publishing. I also though I might be able to design my own cover as I have a love of design and Photoshop. My attempts at a cover: 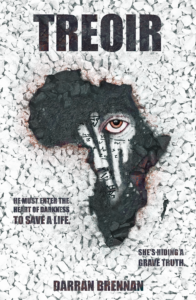 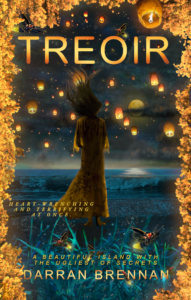 After two rounds with beta readers, I started full-time editing Treoir around December 2019, and after months of intensive work, I had the first solid version by the end of May 2020. In the summer of 2020 I used the Covid lockdowns to perfect the novel, obsessing over every piece of syntax and line, reading the days work aloud and recording it, listening to it before bed, waking and listening again, correcting every comma, every clunky word, until I felt I was seeing a movie play in my head. Besides all that—while recording music in between—I was learning all about self-publishing.

Read an Excerpt from Treoir