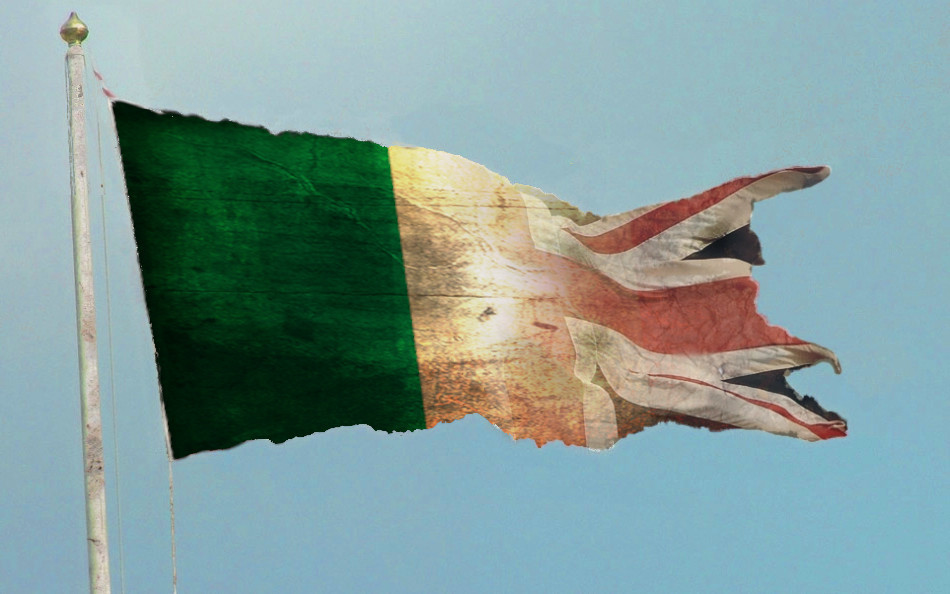 Not Till Then—Let My Epitaph Be Written

Unique as oppressed in that there is no other measure, they spoil for wars now; petty kingdoms to fight over, giving but tokens of brotherhood; sessing their folk into unfed bond-slavery—no measure. The Irish Catholic is twisted by shallow cause while feeding their Tanist bulldogs—no other measure.

From gushing ink the stories bleed of plotting in silence and formidable fate. King’s horses high-step on green cobbles for carts. Invaders who haul revenue away, who look down a pugnacious nose at a sub-species; sub-human; ‘the filth’, a jackeen says to embolden himself and his weak family name. Killing an Irish Catholic is a misdemeanour, marrying one a capital crime. This compounds the seed of duplicitous disobedience that sprouts deep roots.

Across the pond, the stories drift home on tides carrying word of edification from agrarian to rebel; ramshackle to regiment; pitiful to proud as the Redcoats retreat laying dead on their faces. The drums do sound and the pipes of patriot’s holding old white banners of retreat now with the Kings dripping red dye.

Constitutional assuages are as dark and as hollow as twelve pounders. No catholic shall sit his arse in his parliamentary debate. The English laws for the voteless majority seen through plutocratic myopia. And a Romish touch-paper for pitchforks in shaking hands is lit. Farmer’s fists pile spiked pole. Dexterity lacking, taking up the rusting flintlock. Then led by men of exceptional character, knowing yet resolute to be made an example, on shoulder to shoulder aiming true.

July 27th, 1803, a mob of Irish Catholics ask for passwords in the liberties. They line the road with driven nails to stop the cavalry. Kilwarden and the Wolf returning from the country without the password fall to the mob on Thomas street. Their putrid effusions reveal them, never breathing deeply in enough of the promise of change. Slipped into shadows the insurgents on horseback on the night two English dragoons met with the same fate, the same night Clark was grazed for being a jackeen who addresses the Lord Lieutenant about his will to sustain Dublin’s loyalty to a despotic English King. And a magistrate walking on Ormond Quay lucky to live. The jackeens of Dublin, born Irishmen—the English partisans who betray their brothers and sisters, who hang the union jack outside their door—whisper the attacks must have been personal, it’s an attack on the state, these deluded wretches must hang.

England’s enemies billow the fire of ignorant anger on the Emerald Isle while countering pens condescend: what hope have they now of all the advantages of rational freedom. But the fate had been sealed long before 30,000 pike and 10,000 uniforms are found; Dublin is full of rebels.

August 25th, 1803, rebel leader Robert Emmet, a protestant Irish nobleman, is captured in Harolds Cross and is to be executed for high treason. Defending his good name in the dock he says his last words: ‘I wish my Lordships may suffer it to float down their memories untainted by the foul breath of prejudice, until it finds some more hospitable harbour to shelter it from the storm by which it is at present buffeted.’

‘When my spirit shall be wafted to a more friendly port; when my shade shall have joined the bands of those martyred heroes who have shed their blood on the scaffold and in the field, in defence of their country and of virtue, this is my hope, I wish my memory and name may animate those who survive me, while I look down with complacency on the destruction of the perfidious government, which upholds its domination by blasphemy of the most hight—which displays its power over man as over his brother, and lifts his hand in the name of God against the throat of his fellow who believes or doubts a little more or a little less the government standard—a government which is steeled to barbarity by the cries of the orphans and the tears of the widows which it has made.’

‘I confidently and assuredly hope the wild and chimerical as it may appear, there is still union and strength in Ireland to accomplish the noblest of enterprise—of this, I speak with the confidence of intimate knowledge, and with the consolation that appertains to that confidence. Think not my Lord, I say this for the petty gratification of giving you a transitory uneasiness…’

‘Yes my Lords, a man who does not wish to have his epitaph written, until his country is liberated, will not have a weapon in the power of envy to impeach the probity which he means to preserve, even in the grave to which tyranny consigns him.’

‘Again I say, that what I have spoken, was not intended for your lordship, whose situation I commiserate rather than envy—my expressions were for my countrymen; if there is a true Irishman present, let my last words cheer him in the hour of his affliction—’

Lord Norbury says he does not sit here to hear treason.

Robert Emmet asks, in the courts’ infinite wisdom, where is clemency for an unfortunate prisoner whom their policies do not serve.

‘My Lords, it may be part of the system of angry justice, to bow a man’s mind by humiliation to the purposed ignominy of the scaffold.’

Emmet proclaims his loves and vindicates his character and calls the court a farce. He is interrupted and told to listen to the sentence of the law. Whereupon he asks why the whole ceremony not be dispensed with since sentence was already pronounced before their jury was impaneled calling his lordships ‘Priests of the oracle’.

He is allowed to proceed.

‘I am charged with being an emissary of France! An emissary of France! And for what end? Is it alleged that I wished to sell the independence of my country! And for what end? Was this the object of my ambition? And is this the mode by which a tribunal of justice reconciles contradictions? No, I am an emissary—and my ambition was to hold a place among the deliverers of my country, not in power, nor in profit, but in the glory of the achievement! Sell my country’s independence to France! And for what? Was it for a change of masters? No! But for ambition! O my country, was it personal ambition that could influence me, had it been the soul of my actions, could I not by my education and fortune, by the rank and consideration of my family have placed myself amongst the proudest of my oppressor? My country was my idol; to it I sacrifice every selfish, every endearing sentiment; and for it I now offer up my life. O God! No, my Lord, I acted as an Irishman determined on delivering my country from the yoke of a foreign and unrelenting tyranny, and from the more galling yoke of a domestic faction, which it is joint partner and perpetrator in the patricide of the ignominy of existing with an exterior of splendor and a conscious depravity. It was the wish of my heart to extricate my country from this doubly riveted despotism.’

‘My Lords—you are impatient for the sacrifice—the blood which you seek is not congealed by the artificial terrors which surround your victim, it circulates warmly and unruffled through the channels which God created for noble purposes so grievous, they cry to heaven—be ye patient! I have but a few more words to say—I am going to my cold and silent grave: my lamp of life is nearly extinguished: my race is run: the grave opens to receive me, and I sink into its bosom! I have but one request to make at my departure from this world, it is the charity of its silence!—Let no man write my epitaph, for as no man who knows my motives dare now vindicate them, let not the prejudice or ignorance asperse them. Let them and me repose in obscurity and peace, and my tomb remain uninscribed, until other times, and other men, can do justice to my character;—when my country takes her place among the nations of the earth, then—and not till then—let my epitaph be written—I have done.’

Not far from the liberties, in front of St. Catherine’s Church the Irish patriot is led to the scaffold and a noose is place around his neck whereupon he is hanged until dead. Then Robert Emmet is beheaded and quartered while his family look on. No-one comes forward to claim his remains. Robert Emmet is to be buried at the back of Kilmainham Gaol. A later search finds no remains. To this day there is no grave where his sacrifice and his exceptional character can be honoured. There is a memorial site on Thomas Street where he was executed 20th September, 1803. He was 25 years old.

(Taken from Robert Emmets speech 1803 using his use of American spelling and his punctuation.)

Darran Brennan is a musician and the author of Treoir—about an Irish island community thrown into turmoil by the arrival of an African boy and a lecturer’s attempts to rescue him.

Treoir will be available on October 9th, 2020. Read an excerpt here.